The French Presidential election of 2007 was conducted using plurality voting (21-22 April) with a subsequent top-2-runoff round (5-6 May). There were 12 candidates on ballot. Meanwhile, three different scientific studies of alternative voting systems were underway, with real voters at official polling places in France – these studies were all conducted by academics with government funding and cooperation.

The result is an unprecedently high-quality, head-to-head, fair comparison of these different voting systems in action in real life.

Who was the "right" winner?

All methods studied agreed that the winner should be either Sarkozy or Bayrou. Which? I want to break my usual policy and actually take a stance on that: Bayrou was better for France. I am not saying this because of any love or dislike of the policies or abilities of Bayrou or Sarkozy. I am saying it because:

Notes on the table

The rank-order-ballot voters were told the voting system would be instant runoff voting. Hence, attempts to use those ballots to examine other rank-order voting systems such as Coombs elimination are (somewhat) less justified. The score-ballot voters were told the voting system would be median-based (Balinski & Laraki's "majority judgment") with no-score counting as zero, and employed a verbal not numerical value-scale. Hence, attempts to examine other score-based voting systems such as average-based range voting with no-score ignored, are (somewhat) less justified. However, median-based, average-based with no-score=zero (and scores 5,4,3,2,1,0), and average-based with no-score ignored, all returned the same finish order of their top 8 candidates. (But see below re geographic bias correction.) There were no Condorcet cycles hence there was an unambiguous finish order deducible from the rank-order ballots

with each finisher successively preferred over the next, pairwise, by a voter majority. An independent professional France-wide poll by Le Figaro Magazine on 14-15 March 2007 (telephone, 1000 sampled, age≥18) assessing the results of three possible head-to-head runoff rounds ("duel"s) found:

confirming the top three in this order. (The additive standard error should be less than ±1.58%, with a 54:46 duel yielding confidence of victory >99%, and a 60:40 duel yielding >99.999999%. At least 32 other such "Bayrou-Sarkozy duel" polls were conducted between 1 March and 21 April 2007 by many pollsters including BVA, Harris, TNS-Sofres, Ifop, and Ipsos. All 32 agreed Bayrou would defeat Sarkozy head-to-head, with Bayrou's vote share ranging between 51% and 60%. An Ifop 20 April poll, also age≥18 by telephone of approximately 1000 pollees, also considered all three duels, and again agreed Bayrou would defeat Royal by 58-42% and Sarkozy by 55-45%. The combination of all of these polls yields extremely high confidence, exceeding 99.99999999%, that Bayrou was the genuine Condorcet winner.) The Figaro poll also found the "second choices" of supporters of Bayrou, Royal, Sarkozy, and J.Le Pen, finding the interesting result that 1-5% of voters intended in round 2 to vote against their choice in the first round. The largest such liar-type Figaro found was Sarkozy voters, 5% of whom said they intended to vote Bayrou in round 2 (if it were a Sarkozy-vs-Bayrou runoff). Similarly 3% of Royal voters said they intended to vote Bayrou if available in the second round – but this was compensated by 3% of Bayrou voters who said they intended to vote Royal in the second round!

but quite different from

The fact that Coombs and pseudo-Borda did not return ridiculous results is because these French rank-order voters evidently did not strategically/dishonestly demote frontrunners to last or nearly-last place. (At least, the fraction who did, was small.) But that kind of "strategic burial" behavior is very common (80-95%) in Australian rank-order voting, which would have been enough to make both Coombs and Borda yield completely ridiculous results. This difference between Australian and French voters is presumably due to either

It would have been ridiculous to try to use the Borda voting system because only 370 (38.5%) of the 960 rank-order ballots ranked all 12 candidates – Borda would have had an insane ≈60% spoilage rate. However, one can still deduce "pseudo-Borda" scores for each candidate by using the theorem that a candidate's Borda score is the sum of her pairwise vote-totals. If we employ the pairwise-table below and assume that the voters who did not express "A</>B" opinions would have (if forced) expressed those opinions in the same ratios as the voters who did express an opinion about A vs. B, then we get the pseudo-Borda score for each candidate by summing his row-numbers.

Total approval was 232.5%, i.e. the average ballot approved 2.33 out of the 12 candidates. This figure comes from table 15.15 page 382 of Baujard & Igersheim's Handbook paper, and is based on an "extrapolation to all France" of their data correcting for sampling and participation biases. In 2007 the most common number to approve was 2 (done by 32.2% of all ballots), but in the preceding 2002 election it was 3 (by 30.3%). Note that even the approval-winner (Bayrou) got below 50% approval. (And in the preceding 2002 election, Chirac got the most approval, with 36.7%, which was even further below 50%.) In the ranked-ballot election, 41% of valid ballots ranked all 12 candidates (the most common type) as the instructions encouraged them to do; and the second most common type were ballots ranking 3 candidates (18.2% of valid ballots); on average ballots ranked 7.3 candidates.

Independent France-wide professional approval-style polls were conducted by IPSOS, which indeed maintains a database of favorable:unfavorable ratings for French political figures across time. Meanwhile another pollster (BVA) on 22 March 2007 asked "would each of the following candidates be a good President of France?"

These confirm (and remove all doubt) that Bayrou was the approval winner, with Sarkozy and Royal in 2nd and 3rd place respectively.

Baujard & Igersheim also asked their voters various questions about voting systems, and about 40% of them answered those questions. Of those respondents, 83.5% said "yes" to "does the principle of approval voting seem clear to you?" while 89.2% said yes for same question about range(0,1,2) voting. One particularly interesting question was #11:

In which official elections do you think the [0,1,2 rating] method could be used?

Question 12 asked the same question but for approval voting ("methode par approbation"). The answers were:

In all, among the voters who responded to the questionnaire, 83.52% considered range voting applicable to at least one election type, versus 72.43% for approval voting.

This is among the first clear evidence that score voting [more precisely, range(0,1,2)] actually is both more popular and comprehensible than approval voting!! It also is less-clear evidence that score and approval voting are "adoptible" and apparently would win by a massive margin if given as an option on a referendum. These conclusions unfortunately are attackable because only 40% of the pollees answered these optional questions and hence there may have been self-selection bias.

In contrast, an October 2010 nationwide professional telephone poll of 1202 random Australian adults found that they prefer plain-plurality voting versus the preferential (instant runoff) system they presently use to elect their House. If forced to choose one, they'd choose to abandon IRV – the poll's result was 57% to 37% (with 5% don't know/refuse). Also Britain conducted a binding referendum on 5 May 2011 asking voters to decide whether the UK should switch from plurality to IRV voting, resulting in a massive landslide victory (68% to 32% of the 19.3 million votes) for "stay with plurality." Another big referendum defeat for IRV was on 12 May 2009 in British Columbia, Canada, where "switch to IRV" got only 39.09% of the 1.65 million votes.

There also were France-wide pre-election polls by a number of polling agencies agreeing Bayrou would have defeated every rival in a head to head "Bayrou versus X" election (some already discussed). 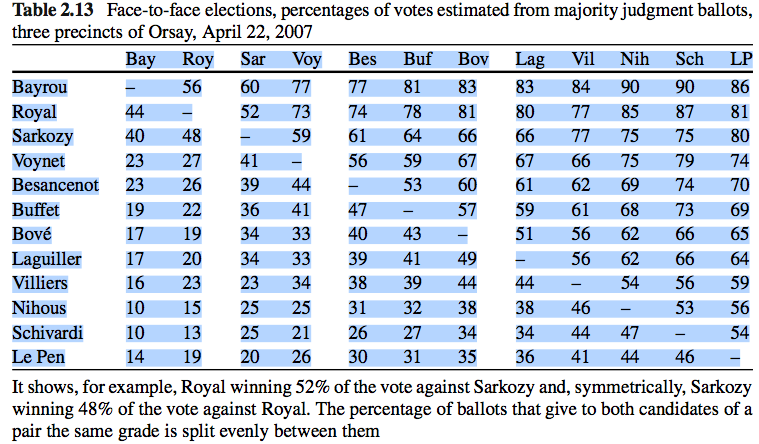 IRV paradoxes that occurred in this election:

In this IRV election, approximately 4% of the IRV voters with unspoiled ballots failed to affect the final Sarkozy vs. Royal round (because, e.g, they had failed to rank either) – plus 7.0% of the ballots were spoiled, so in all about 11% of the IRV voters failed to have any impact on the final Sarkozy vs Royal round. That considerably exceeds the Sarkozy-vs-Royal victory margin. In the official election (2-round plurality voting) however, the spoilage rates were well below the S-vs-R victory margin. This means that the official 2-round noninstant runoff, in this case, had a greater claim to legitimacy than an instant runoff would have had (even though they both delivered the same winner, Sarkozy).

Strategic voting: A TNS-Sofres-Unilog Groupe Logica CMG poll conducted on election day (22 April 2007) asked voters what most determined their votes. One of the seven possible answers was a deliberate strategic vote for somebody who was not their favorite ("le vote utile"): this answer was given by 22% of those (who said they voted) for Bayrou, 10% of those for Le Pen, 31% of those for Royal, and 25% of those for Sarkozy.

And hence really, B&L speculated that all France using the MJ voting method probably would have elected Sarkozy. They attempted to correct for this bias, while also producing interesting results, as follows. They first extracted (by use of weighted randomness) a subsample of 501 ballots from their 1733-ballot set, using a weighting based on that ballot's favorite candidate, with the intent of causing the 501 to be more-representative of all France than their original (geographically biased) 1733. This attempt succeeded – the 501 was indeed more representative of all France, especially about the top three candidates (it was however, worse than Orsay-12 as regards Le Pen):

They then extracted a uniform-random subsample of 201 ballots from their 501-ballot France-representative master set, and recorded who won within those 201 ballots according to each voting method. Then they repeated that experiment 10000 times in all. The result was this very interesting table of win-counts (this is from page 50 of Dolez et al):

Note the win-counts in each row of the table should sum to 10000, except for the "Condorcet" row which sums to 9986=10000-114. Unfortunately, this sum=10000 condition is (slightly) violated in two cases, indicating B&L's computer program had minor "bugs"! (Also, it would have been better to use subsample size≥251, not 201.) Note that even within B&L's corrected-to-unbias 501-sample, there still remains slight pro-Bayrou and anti-Sarkozy bias. Nevertheless in this experiment B&L found Sarkozy had a greater win-probability (using MJ) than Bayrou. So, MJ France-wide should really be regarded as "electing either Sarkozy or Bayrou, with greater chance that it was Sarkozy" or perhaps even just "Sarkozy, full stop" in this election. That "judgment" agrees with the official result but differs from approval, average-based range voting, Condorcet, and Borda.

These studies are very exciting. They look like they show the following: