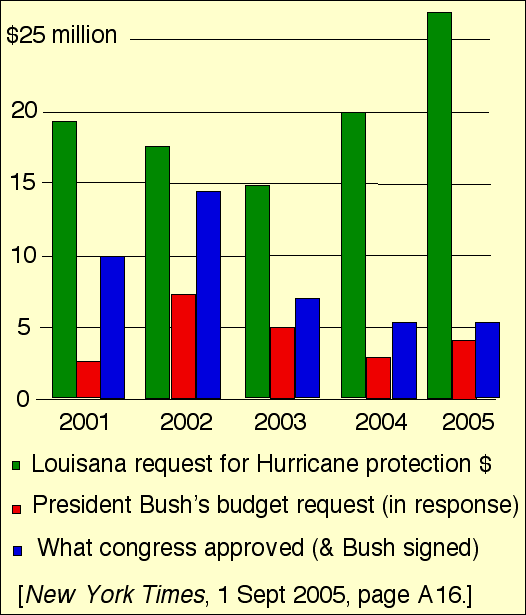 (jpg version of above png picture)

FEMA (the Federal Emergency Management Agency), in a report well before both Hurricane Katrina and the 9/11 attack, summarized the top three threats to the USA as a terrorist attack on New York, a major earthquake in San Francisco and a hurricane strike on New Orleans. "The New Orleans hurricane scenario," the Houston Chronicle wrote in December 2001, "may be the deadliest of all."

A 6 August 2001 presidential daily briefing (later published in the bestselling 9/11 commission report, note this was one month before 9/11) was titled "Bin Laden determined to strike in US" and said that the FBI had detected "patterns of suspicious activity in this country consistent with preparations for [airplane] hijackings.''

But as this figure shows, Bush and Congress by bipartisan budget vote turned down Louisiana's requests for mere tens of millions per year of money to protect the city of New Orleans. This may have had something to do with the fact New Orleans contained a lot of urban and poor people, many blacks, and hence a high percentage of Democrat voters; Louisiana had a democrat senator, and starting in 2004, a democrat governor; whereas: Bush and the Congressional majority were republicans.

That leads to fun games.

Apparently, protecting New Orleans was worth about a thousand times less than the $28 billion embassy they were constructing in Iraq. It was also worth less than the $231 million that Bush and the GOP allocated to building one of the world's great bridges connecting Alaska's Gravina Island (population less than 50) to the megalopolis of Ketchikan (pop. 8,000) by a bridge nearly as long as the Golden Gate and higher than the Brooklyn Bridge. (But then, of course, Alaska is a strongly republican state with both senators and its governor republican, and whose senior senator is head of the transportation committee.) And Wyoming evidently was felt to be at over twice the risk from terrorists – with $31 million in anti-terrorism funding in 2003, more per capita than any other state – than New Orleans faced from hurricanes that year. (Amanda Ripley: The fortification of Wyoming, and other tales from the new front line, Time 22 March 2004.) But then, of course, Wyoming is also a strongly republican state with both senators republican and the home of vice president Dick Cheney.

And meanwhile over a third of the Louisiana National Guard (and even higher percentage of Mississippi's) were 7000 miles away in Iraq where they were unable to help with the Hurricane Katrina disaster. (That's an even bigger loss than these raw numbers suggest because many of these part-time soldiers had to leave their full-time police, fire department, and paramedic jobs behind.)

Another problem with the 2-party system – in addition to the tendency to place political rewards to "your supporters" and punishments to "your enemies" ahead of the public good – is the desire to appoint party hacks, cronies, and loyalists (of whom there are a plentiful supply) instead of experts, to key posts. Thus Bush appointed Joseph Allbaugh as head of FEMA in 2001, although Allbaugh had no particular expertise in or experience handling emergencies, but rather had been then-Texas-Governor Bush's chief of staff and campaign manager for the Bush-Cheney nationwide campaign. (Allbaugh had a B.S. in political science from Oklahoma State University.) In 2003, Allbaugh was replaced by Michael D. Brown, who may have had, if anything, even fewer qualifications. (Former estate and family lawyer and bar examiner. The Boston Herald reports that Brown was "fired from his last private-sector job, overseeing horse shows... after a spate of lawsuits over alleged supervision failures... `He was asked to resign,' Bill Pennington, president of the IAHA at the time, confirmed last night." [Brett Arends: Brown pushed from last job: Horse group: FEMA chief had to be `asked to resign', 3 September 2005]). Apparently the main reason Brown was selected to head FEMA was that he was Allbaugh's former college buddy from Oklahoma State.

[The New York Times 9 Sept. 2005] The other top officials at FEMA don't exactly have impressive resumes either. The Chicago Tribune reported on Wednesday that neither the acting deputy director, Patrick Rhode, nor the acting deputy chief of staff, Brooks Altshuler, came to FEMA with any previous experience in disaster management. Ditto for Scott Morris, the third in command until May. Mr. Altshuler and Mr. Rhode had worked in the White House's Office of National Advance Operations. Those are the people who decide where the president will stand on stage and which loyal supporters will be permitted into the audience.

Consider, for example, the fact that in votes for court of appeals nominees, Republican Senators during the Bush administration (when they had majority control) produced 2703 votes for the nominee as opposed to only a single "no" vote, cast by Trent Lott against judge Roger Gregory, who was the first Black ever appointed to this position [Congressional Record, 23 May 2005, page S5726].

Our point: This "rubberstamping" behavior in which every Republican nominee is auto-approved whenever the Republicans control the Senate and Presidency would not happen if the US government were instead a multiparty system in which usually no single party could exert singlehanded control. In that case, inter-party coalitions would be needed to approve nominees, they might actually be considered on their merits, and those whose sole qualifiation was loyalty to the presently-top party might have a harder time getting appointed. This goes for all nominees, not just judges and the heads of agencies such as FEMA.

The two-party system caused by plurality voting has a lot of disadvantages, and those disadvantages can be tremendous. They are not just theoretical quibbles about "Bayesian regret" – they can be very real: They can and do add up to destroyed cities and lost lives. Range voting seems more effective at ridding us of the 2-party system than any reasonable competing single-winner voting system.