By Jessica Jones, 25 Nov 2014; this is the text of her story for NC public radio.
Comment by WDS: it is important to note that the Mattingly-Vaughn study indicates NC's pro-Republican bias caused by the gerrymandering was not merely the result of "inherent structural factors" related to more-urban voters being more-Democratic so that "consequently" any reasonable district-drawing scheme would tend to "pack" Democrats into small regions and hence artificially give Republicans an advantage. Reality: despite that effect NC still would have elected 6 to 9 Democrats to its 13 seats. Indeed, the 300 random maps summarized in their "figure 1" found all 300 elected 6 to 9 Democrats, with zero electing 5 or fewer. The gerrymandering, which elected 4, thus went well beyond this effect.

It's near the end of a long workday and math Professor Jonathan Mattingly is climbing a steep set of stairs to his office on Duke University's campus.

"We share this hall with the physics department, physics starts somewhere right down there," Mattingly says. He opens the door to reveal an office that looks like it belongs to a math professor. There are books everywhere and a big chalkboard on one wall covered with half-erased equations. This is where Mattingly first got the idea to include one of his students, senior Christy Vaughn, in the mathematical conundrum of the 2012 U.S. Congressional Elections in North Carolina.

"One day I kinda had this idea that we should look at gerrymandering. And so I called her and I said I got an idea," says Mattingly. (Gerrymandering is the setting of electoral districts in an attempt to obtain political gain.)

"Right away I was very interested in this project because it's just such a stark result that so few seats were [awarded to Democrats] when the popular vote was so different," chimes in Vaughn.

That was back in the summer of 2013, when articles were still circulating that blamed those results on gerrymandering at the General Assembly. But Mattingly, who specializes in probability, says no one had attempted to prove or disprove that theory mathematically.

Mattingly said they went in with an open mind. Maybe the discrepancies were due to geographical differences, or perhaps there was some gerrymandering that affected a couple of seats...whatever the result, they wanted the numbers.

"We wanted to ask ourselves, could we quantify, could we give some empirical force to the idea of what the right number of elected officials were," said Mattingly.

So Mattingly and Vaughn, who are both graduates of the North Carolina School of Science and Math, decided to create a series of district maps using the same vote totals from 2012, but with different borders. 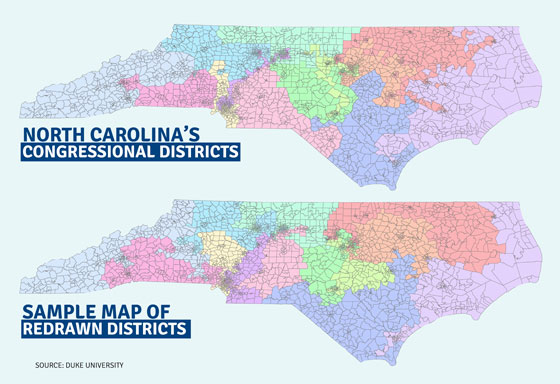 Their work was governed by two principles of redistricting:

Using those principles as a guide, they created a mathematical algorithm to randomly redraw the boundaries of the state's 13 congressional districts.

Says Vaughn: "And then, we just used the actual vote counts from 2012 and just retabulated them under the different districtings."

"But there was a lot of work behind that. Christy did a tremendous amount of programming," says Mattingly.

When Mattingly and Vaughn tabulated what would have happened had residents voted the same way but in differently drawn districts, they were surprised. Mattingly turns to his computer to pull up their work, which summarizes how the balance of the congressional seats would have come out under those 100 different maps.

Mattingly says this chart – and the rest of the study – shows mathematically that the outcome of the 2012 congressional election – with four Democrats elected – was not representative of how people voted.

Legal scholars who study redistricting say the work is interesting.

"It's a wonderful academic project and a wonderful math exercise," says Justin Levitt, a law professor at Loyola University. He commends Mattingly and Vaughn for their work. But, he cautions, in the real world, there are many other factors that go into drawing district lines.

Levitt says other factors matter too, including geography.

They hope their study might serve as a kind of diagnostic tool that can help determine whether districts are fairly drawn or not.

In response, Mattingly says it's possible to design the program to account for minority representation, but he and Vaughn chose to keep it as simple and as transparent as possible for now.

They hope their study might serve as a kind of diagnostic tool that can help determine whether districts are fairly drawn or not.

Mattingly also hopes it might encourage more state lawmakers to think about how best to shape district lines.

Some lawmakers at the General Assembly have tried to add safeguards. But bipartisan bills to establish an independent commission to draw district lines haven't made it out of committee.