We shall here argue that IRV leads to 2-party domination, and Australia is evidence of that. However, the situation is somewhat more complicated than that; Australia uses several voting systems for different purposes – IRV is only one of them – and because of the other multiparty-genic nature of some of the other systems (especially 10-winner reweighted-STV PR for Senators) Australia is not entirely 2-party dominated.

According to the Australian analysts at http://www.australianpolitics.com/voting/systems/preferential.shtml the "Disadvantages of the Preferential [IRV] System" are

According to Wikipedia, the minor parties (e.g. The Australian Democrats, Greens, One Nation, Family First, Christian Democrats) are often able to hold Senate seats thanks to the multiwinner PR system used to elect it, but have usually been unable to hold House seats thanks to the fact that they are elected using IRV. As I write this in 2004-2007 the total number of House seats owned by these parties is zero out of 150. (There is a seat owned by CLP member Dave Tollner, but the County Liberal Party is really the Liberal/National party branch in the Northern Territories. There are also 3 seats held by unaffiliated MPs, all of whom only got there because they used to be major-party members originally.) The total party composition of the House is {Liberal=74, National=12, CLP=1}, Labour=60.) The total party composition of the Senate is {Liberals=33, Nationals=5, CLP=1}, Labour=27, AD=4, Greens=4, Family First=1 – much less 2-party dominated. (The "LibNat" members are shown in {these brackets}.). In past years the situation has been similar:

There evidently are three major parties, but there really are only two because the National Party is really essentially a junior partner of the (misnamed) Liberal Party and always forms a coalition with it and always elects a Liberal-party PM if that is achievable; hence a vote for the Nationals is essentially a vote for the Liberals. Indeed many Australians and Commentators refer to them as the "NatLibs" or "LibNats" because they are "really" one party. Indeed they submitted a joint "above the line" (party vote-ranking recommendation) in the last (2007) elections, and they almost always arrange never to run candidates against each other.

Opposed to the NatLibs is the Labour party.

Every one of the 17 prime ministers since 1923 has been from one of the top two parties provided we lump the National party with the Liberals. (Asterisks: The Nationalist party was absorbed into the UAP in 1931, and the UAP was absorbed into the Liberal party in 1943. The "Country" party later was renamed the Nationals.) Since 1941 the prime minister has been either a Labor or Liberal Party member all but one year. That's because, in all but rare instances, the Governor-General appoints the leader of the majority party in the House of Representatives to the post.

Warning for the unwary: Don't be confused about Australian parties (even though some may try to confuse you)

Some have tried to confuse the issue by pretending that the party normally called the "NatLibs" or "LibNats" are really 4 separate parties, and not (what we contend) effectively one party:

Also, despite calling themselves "liberal" the LibNats are in fact the "conservative" party in the eyes of practically all worldwide! Do not be fooled by these historical-accident naming quirks. (Australia truly is "upside down" in this respect!)

Also, there sometimes are "parties" consisting of one person, as a legal fiction. They are really independents, not parties, and we count them as such. (Why am I counting that way? Because I am not an idiot. Similarly, in the USA, Joe Lieberman won his Senate seat from CT as an independent after losing his Dem-party primary. There might be some people who would say Lieberman was "not" an "independent" and was "really third-party" because he technically won it under the "Joe Lieberman for senate party" flag, a party he created for that occasion for legal reasons. Those people would be idiots. Let us not join them.)

But we warn you that sometimes that one person can get a few friends too, and the more friends he gets the more muddy it becomes about whether to regard them as a one-person fake party, or a real political party. Eventually the latter view becomes more appropriate. As I am (re)writing this in 2015, this may be happening, or about to happen, with the "Nick Xenophon Team" (wikipedia: NXT is "a centrist Australian political party founded by Senator Nick Xenophon on 1 July 2013 and making its debut in the 2016 elections"; NXT was a great expansion of what formerly was called the "Nick Xenophon Group"); and perhaps even "Katter's Australian Party" (KAP, founded 2011). Later note: In 2016 both ran fewer house candidates (respectively 18 and 12 candidates for the 150 seats) than any of the "science party," "family first," "animal justice," and the "sex party," all of which are rather fringe, etc...

Essentially every time an independent has won a seat in Australian House, it has been because he originally won as a major party candidate, but then later got into a fight with his party and decided to continue career as independent. (There might be exceptions who always were independent, but I am not aware of any during my lifetime. Similarly in the USA most independent high office holders got there by originally being elected major-party.)

except in a single case, Riverina 2010, which also was handily won by a NatLib by landslide (got over 68% in final IRV round).

Those "amazing" facts strongly suggest my "conspiracy" theory is correct: the NatLib coalition carefully arranges each year, for the purpose of barely-preserving the legal fiction that the LibNats are "not" one party, to have a small amount of LIB-vs-NAT competition, amounting to 2.5% of the races, and always confines it to a single state and to districts in which a LibNat win or LibNat loss is virtually a sure thing.

We hope this resolves the confusion.

I just looked through the (late 2006) membership of the Australian House of Representatives, and the Legislative Assemblies. Shown below are legislative bodies elected by Preferential Voting (IRV), the number of independent members, and the total number of members.

Notes:    * = also 1 member of One Nation party.
** = Tasmania is "upside-down" – the Legislative Council is the upper house, as with other states, but it's the upper house that uses single-member districts. 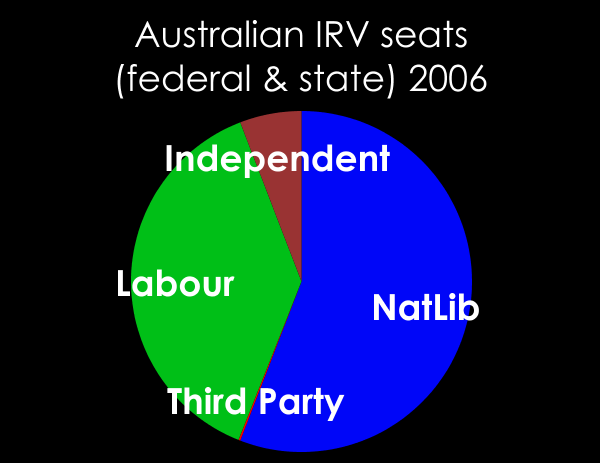 We conclude that third parties are almost totally unsuccessful in Australian IRV seats (1 seat out of 564) but independents have won 33 seats (5%). This is similar to the USA, where Independents also outnumber third-party members in statehouses and federal government seats. In the USA, there are zero third-party congressmen but (after the 2006 elections) two independents out of the 553 total (namely Lieberman & Sanders). Sanders replaces Jeffords who also was independent.

USA third parties are so weak that joining them does not really help. For example Lieberman's 2004 Senate campaign in Connecticut (former Democrat running independent) had more funding by far than the entirety of the largest third party in the USA, nationwide. Sanders achieved no success running third party but later, with the aid of some uncontested and opposition-vote-split elections, rose to prominence all as an Independent. Lieberman and Jeffords both were major party members their whole political careers (Dem & Repub respectively) until, as Senators, they left their parties due to disputes. This did not prevent their re-election as Independents.

According to Australians who helped us, the Independents usually got there, just like in the USA, by having disputes with their major parties causing them to part ways. (And in many cases these divorces were only temporary.)

Between 1950 and 2015, exceeding my lifespan, the Australian House with IRV has elected only one single third party member – Adam Bandt – ever during that span in regular elections (not counting special off-year elections caused by, e.g, somebody dying in office).

There are many genuine third parties in Australia, the most prominent in 2004 being

Meanwhile in the USA, there have been zero third-party members of either House or Senate throughout the last 40 years, but there usually have been several independents in office. So two-party domination works approximately the same way in the USA and in Australian IRV house, and at the same level of massiveness.

In the last three Australian (Central government) House election cycles, zero third-party members were elected in 2001. Then zero in 2004. Then it happened again in 2007 with the NatLibs getting 65 and Labor 83 seats, with 2 seats going to unaffiliated MPs. (150-member house.)

This was not because other parties did not run candidates. On the contrary they contested every one of those 450 races with an average of 7 candidates running for each seat. Nor is it because those other parties were weak. On the contrary, third parties can and do win seats in the Australian Senate (elected via a different system) and hence are far stronger than in, say, the USA.

So there sems little question that IRV, if enacted in the USA, still would yield duopoly.

The composition of IRV seatholders in Australia is very biased against third parties: examining all 564 statehouse & federal IRV seats we found only a single one occupied by a third party.

But the PR seatholders are much more third-party. E.g, of the 76 Australian senate seats (post-election 2004) we find that 9 were third-party members (4 Green, 1 Family-First, 4 Dems). That is 67 times larger third-party seat occupancy rate in PR than in IRV seats.

So it should be obvious that IRV has a massively discriminatory effect against third parties in Australia.

We conclude that the IRV system in Australia has led (and in the opinion of the Australians themselves has led) to 2-party domination, although it could perhaps be argued it is 3-party domination depending on how independent you regard the Nationals as being from the Liberals, and also depending on how significantly you view their present 7.6% seat share in the Senate+House combined.

However, this 2-party domination presently is slightly less severe than in the USA, probably mostly due to the moderating effect of Australia's simultaneous use of 10-winner PR reweighted-STV for Senators. (Australian third parties have no trouble electing their members as senators, with e.g. 4 Greens, 4 Australian Democrats, and one Family First senator incoming in 2008 out of the 76 total. That is because senators are not elected using IRV. They are elected using multiwinner PR elections.) But perhaps arguably, it's because IRV leads to a slightly less powerful kind of 2-party dominance than does plurality – but we think mainly because Australian politicians feel a little bit more willing to drop out of (or be kicked out of) their major parties than US politicians, resulting in a slightly higher percentage of "independents." In any case, alternative parties in Australia are dissatisfied with IRV.